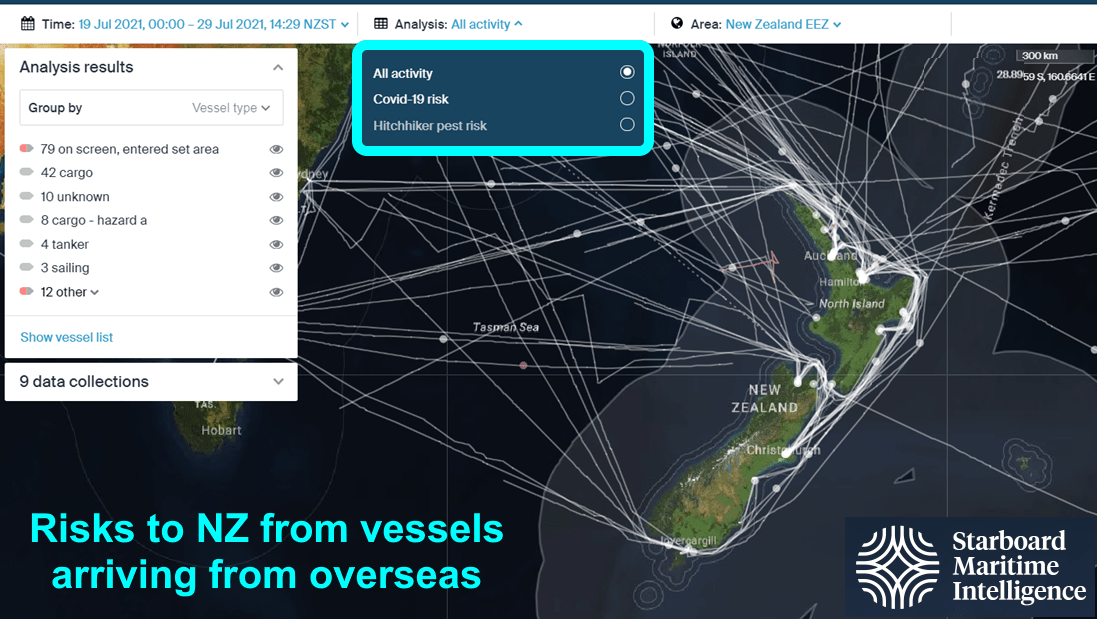 In the recent NZ Biosecurity Awards (operated by the Ministry for Primary Industries) Xerra won both the categories for which it was entered and also the Supreme Award, recognising the platform Starboard Maritime Intelligence™ which the company has developed over the past three years.

Starboard is space-enabled: satellite receivers inform us of the locations and movements of vessels on the oceans using Automatic Identification System (AIS) signals, and Starboard’s algorithms automatically trace these to determine the risks they pose to NZ from their previous ports-of-call and encounters at sea. Fishing vessels that may be illegally operating sometimes switch off their AIS to evade monitoring… but using satellite-borne synthetic-aperture radar to scan the seas, and also RF detectors that pick up their navigational radars, we can map their locations and alert approriate authorities.

Applications of this new technology would be a game changer for any country with maritime security needs like New Zealand.

Dr. Duncan Steel is a space scientist, astronomer, and world reknown author. Over the past thirty years Duncan has worked on space projects in the US, UK, Australia, Sweden, Canada and NZ. His research has focussed largely on asteroids, comets and meteors, but he has also been involved in planning missions to Mars and the search for life elsewhere. Additionally he is an expert on the history and astronomical basis of calendars.

Duncan is the author of four books, over 140 research papers, and more than a thousand articles in newspapers and magazines published around the globe. He has appeared in dozens of TV documentaries, and hundreds of radio interviews. Asteroid 4713 Steel is named for him, as is a lunar-roving robot in one of Arthur C. Clarke’s science-fiction novels.

To learn more about the world space Yuri’s Night events commemorating the first human in space, go to https://www.yurisnight.net/events/.

This event is held in collaboration with the Space Enthusiasts and Professionals Meetup: Wellington

To register for this event please visit the following URL: →

A social enterprise to democratize access to space for everyone, anywhere through education, entrepreneurship and open sourced community platform. SpaceBase develops and runs educational programs, advisement, and space consulting servces.